The force to reckon with is Wanavokali a Kenyan musical group composed of six performers; Chepkorir, Lenah, Mella, Riki, Rui, and Ythera.

In an exclusive interview with the writer, the dynamic music band narrates their music journey and talks about their new single music release.

“We met in 2018 when we auditioned for the Safaricom Twaweza Live tour as background vocalists.”

The collective of six hearts throbbing to one beat got to perform on large stages across Kenya with some of the best musicians, dancers, and producers Kenya has to offer such as Nameless, Cedo, Nyashinski, Mercy Masika, Willy Paul, Fena Gitu, Bahati, Akothee, King Kaka just to mention a few.

Being background vocalists with different musical journeys, they did not know each other and thus decided to come up with a WhatsApp group to communicate easily.

“Ythera is the one who coined ‘wanavokali’ as the name of our WhatsApp group.”

After working together for almost a year, the talent-driven vocalists became good friends and realized how compatible they were in the music field. This prompted the birth of ‘Wanavokali’.

In July 2019, Wanavokali was not just a WhatsApp group, it was also a music band that created a way for the six vocalists into the music industry.

Post the Twaweza Live tour, they all embarked on a new journey as Wanavokali, where they posted a string of short covers on their Instagram page and garnered a huge following not forgetting the unwavering support with adoration from all over the country.

In late 2019, Wanavokali auditioned for the Old Mutual Amazing Voices and had the pleasure of competing with eleven of the best singing groups across Africa including Kenya, Zimbabwe, Ghana, and South Africa.

“It was a tough and challenging experience. However, we worked hard, made it to the finals, and won!”

The validating experience signified that the six songbirds were heading for greatness. After their big win, they came back to Kenya and did a collaboration with an award-winning artist Collo G.

The collaboration song ‘Unioshe’ was nominated for Cafe Ngoma Award for Best Crossover Act 2019-2020 and won the verse five awards for the collaboration of the year 2020.

From being background vocalists of the most celebrated musical powerhouses to be the stars on the frontier, Wanavokali has continued to cement its authority in the music scene.

In 2021, they got to release their first single ‘Rhumba’ a musical endeavor that pays respect to the golden era of rhumba music with its characteristic guitar licks and groovy baselines. This release sparked the airwaves and received over three million views on YouTube.

With so much zeal they shared their first original album in the same year, titled ‘Wanavokali The Album’ that consists of eleven songs; Rhumba, Kula Tatu, Reasons, Trying, You, Revolution, Gratitude, Nitangoja, Love Is In The Air, Amani and What A Time.

The sophisticated artists have so far been in many media houses and publications in both Kenya and across Africa.

Recently, they have released a new single dubbed ‘Dunia’ which is a cry about the realities of life. These mounting societal expectations come about with the coming of age and the limitations to reaching them.

Wanavokali explores the heartbreak that comes from choosing to pursue your unfulfilled dreams. The song asks for relief from the fear and anxiety experienced as we grow older, giving us another chance to realize the goals we confidently hold on to in life. 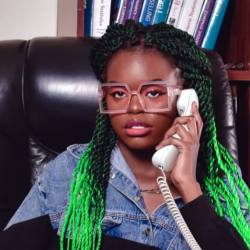